The Better Chrome Remover: Removes both Chrome and Clear lacquer base

Dateline: April 16 & 17, 2016 - OK, so file this one under “Epiphany” or “Stream of Consciousness” or “Spectacular D’uh Moments”, but it occurred to me over the weekend that if Ready Strip works so well on paint and especially on clearcoats, then wouldn’t it work great on removing both chrome and the frequently stubborn clear coat frequently used by manufacturer’s as the basecoat for the vacuum plating to adhere to? I decided to give it a try. I grabbed a tree of parts from a kit that I had previously tried using Clorox bleach on with only marginal results. I think it took nearly a week to get the plating off, which is unusually long. So I slopped on some Ready Strip and slid the treated tree into a Zip-lock bag to see how long it might take.

After a half an hour it was pretty evident that it was making fast work of the chrome. When I finally got around to scrubbing off the Ready Strip with warm water about 24 hours later, the tree was whistle clean – I mean, not a stitch of chrome or clear coat . This worked so well, I won’t be using anything else in the future. It made fast work of it, cleaned up easily and left the parts in pristine condition.
​
If you have any comments or questions about this, please send me an e-mail at himself@oldimagineer.info

Keep the glue out from under your fingers!
Tim

It’s really simple. Once properly geared up, goob a good gooey coat of Ready Strip onto the model. Depending on the type of paint, how many coats the remover has to chew through, and whether the model is a resin shell or plastic will determine just how long or how many applications this will take. The models shown here were a collection of things I needed to strip or then decided to experiment on after the initial results proved to be excellent.

In each case I started by applying a coat for a half to one hour before attempting to remove some of the paint. That gave me a good feel for how quickly the stuff works. On cars that have a basic prime, silver undercoat, and color topcoat, this first application should take off a good amount of the paint. Stuff coated with any clear finish will take longer and several applications, while multiple layers may take about three coats running 8 to 12 hours a piece (and there is a way to do this without the stripper drying out).

One of the photos below show a model with Ready Strip applied that I let dry on the model to see how long it would take and what the result would be. True to the instructions, it will dry out in about four hours if left in the open air. At that point the paint has reset, though you can was off the dried Ready Strip and start again. A way to extend the working time and efficiency of the stripper is to place the shell covered in stripper into a large, 1 Gallon Zip-lock bag and seal the bag. This will keep the stripper wet and active for much longer.

Once you decide it’s time to remove what has come loose, use any kind of scrapper to scrape off the paint as best as possible. Work the scraper into the loose paint and remove as much of the loosened paint and stripper as you can. The take a stiff brush and a little liquid soap and start washing the model off in tepid water. Tepid means not hot, not cold, but lukewarm water. Too cold or too hot seems to reset the paint and gets the stuff sticky again. If this happens, work a bit more fresh stripper into the sticky area and rub it down with w 3-M scrubby pad.

It will take about three applications to get the shells back to a nearly pristine shape. And unlike other stripping agents, one you have washed Ready Strip off, you won’t need any additional treatment before working on the model. You can go right back to the normal protocol of scuff sanding, washing, drying, priming, and painting as if you were working with a new kit.

You'll see in the Lumina photos the results of two rounds of "dipping". As you can see, thin resin castings don't hold up well to this kind of abuse. Still, it salvaged the body well enough that I can give it another go at building a V-6 powered Grand National racer using some fresh resin parts.

While this product is MUCH safer than most other forms of paint finish strippers it is nevertheless a caustic material designed to remove paint and finishes, so be SMART and WISE and use appropriate protection for yourself and your work area.  READ the Instructions AND Warnings and follow them carefully!  .

HOW TO USE IT 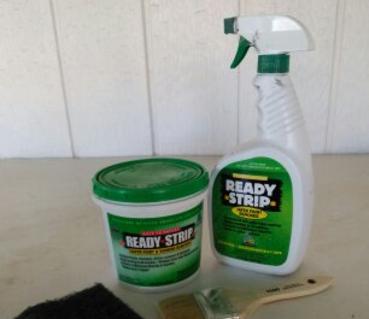 HOW TO USE IT

You need a container of Ready Strip, some good rubber or Nitrile gloves, a throw away brush or two, a stiff or hard toothbrush, some dish soap or liquid laundry soap, a bucket of warm water, a one gallon Zip-lock bags. I also had a rubber and metal scraper handy, but found the best scrape off tool to be a .020 piece of sheet plastic. 3-M Scubby pads are good too for final cleanup. Wearing a rubber apron is a good idea as is some eye protection. And make sure wherever you do this that the table top or counter you are working on is well protected. Avoid Mom’s Dining Room Table or your Wife’s Corian or granite countertop. Think “garage floor”.

A SAFER WAY TO TACKLE MAJOR SCREW-UPS AND PAINT FAILURES...

There are lots of different scenarios you may bump across where you would really like to remove the paint that’s on a model and try again. It could simply be you need the modeler’s equivalent of a painting mulligan - paint job applied suddenly goes south – at a critical step – or the paint turns out to be the wrong shade or color, or you find an old model you want to restore or re-do. For a long time I have been a faithful advocate of using brake fluid to dissolve old paint, but brake does all kinds of funny things to resin. I actually dissolved an entire 1/43rd scale model in brake fluid because I forgot about it for a day or two (or three) too many. And the weird things it does to resin are only the start. Skin and other things don’t respond well to it either, while it can make some plastics almost rubber-like.

A buddy recommended Oven Cleaner, but after trying that a couple of times I decided that it was the modeling equivalent of chemical warfare and quickly decided there had to be a better way. I even tried a few different paint removers from my local auto parts store. In either case I discovered that any paint not successfully removed usually resets into some sort of compound that then completely defies removal at all.

The other problem is that any of these above seem to stall when the paint job has some kind of clear coat on it. I recently dumped a ’55 Chevy Panel that had a popular modeling clear coat on it and I can now write with assurance that this particular clear coat truly protects the finish against even Brake fluid and oven cleaner. Good to know if you are anticipating a potential attack from modeling terrorists at the next big show, but it didn’t solve the problem I was trying to undo.

I then stumbled on a video on YouTube that showed a modeler using an environmentally safe paint remover call Ready Strip, which can be found at home centers like Home Depot and Lowes and at most hardware and paint stores such as Ace Hardware, etc. The stuff is a light green colored paste, the consistency of pudding or cake batter before either set up in their respective cooking processes. The video (go to https://www.youtube.com/watch?v=epzxR7SDMEc ) by heartofivory lasts about 2 minutes and 15 seconds, but was enough to convince me to give it a try with a few improvements, but suffice it to say it really does work and id far, far safer than any of the other options out there and the results are supurb. Just follow along...