Dad was born with Hydrocephalus, which is water on the brain. Most children back in the early 20th century born with this condition rarely lived through childhood, but Dad somehow survived it. A side-effect of this condition was that his eyesight was never great and faded over time. He also had a series of other physical ailments, but what he had going for him was a robust since of humor and his dad.

My German grandfather was an artisan and first-class craftsman. By trade, he was a photo engraver. These are the guys that used to convert photographs to a complex set of tiny dots on metal plates – all by hand no less – so that the images could be printed in magazines, newspapers, and other publications - the process used before the offset printing processes used today. As artistic and talented as he obviously was, he stunned me one time when I asked him to teach me how to draw. He said he would love to, but couldn’t, that he himself never learned to free-hand draw. Mind you, he was an accomplished painter, did beautiful landscapes and still lifes, and this bit of news didn’t make much sense to me. But he explained that he learned to compensate by using a system where he would grid a photo and then grid a canvass, essentially upscaling the picture block by block. In showing me how he did it, he explained that some people have the raw talent to be able to free-hand sketch a large drawing – and that he didn’t. But he went onto explain that tools and other helps can often make up for the raw talent that we may lack or have yet to develop. To underscore the point, he then free-hand drew an almost a perfect circle, then critiqued its flaws, then grabbed a cup, inverted it, and traced a perfect circle. Improvise. That was the lesson. Opa - the German slang for Grandfather - taught us all that lesson and the mindset that went with it, and then went on to craft all kinds of beautiful things as if to demonstrate the lesson in an endless variety of ways.

But Dad trumped him by taking the lesson to the max. He gradually lost his vision over time and by age fifty, it was pretty much gone all together. Eventually it forced him into an early retirement first as an offset pressman and then later from owning our neighborhood hardware store. That first month or so after giving up the store was tough, and he and Mom had decided he should go to the School for the Blind so he could learn some new skills. He wasn’t thrilled to say the least. He acted like a kid headed to First Grade and dug in his heals accordingly, grumbling the whole way as he went on that first day. Some guy was introduced to him when he arrived and gave Dad a tour of the place, asking him what he liked to do. At this point Dad wasn’t totally blind, but well past legally blind and told the guide that he used to like to do woodworking, to which the guide enthusiastically responded he did too and immediately walked them both to the School’s woodshop. They spent a while going over a bunch of things, showing Dad how the tools could be safely used, then gave Dad a Click-O-Matic – a handmade measuring tool that he would be able to use to measure more accurately than I could fully sighted. At the end of the tour the guy tells Dad that he would be one of his instructors and Dad was thrilled. It was only when they went to shake hands that Dad even realized that his guide was totally blind. Needless to say, he came home far more excited and enthusiastic than when he had left that first morning.

After that, it was as if Opa’s lessons on improvising became Dad’s life mission and watchwords. If Opa taught us all that there are more ways than one to skin a cat, Dad lived it to the max, and I find that it is a vital and inseparable part now of who I am. I rankle at folks when they say “It can’t be done!”, it drives me crazy. Most of the time it’s a matter of not having thought it through, or getting the steps out of order, or realizing there are more steps to take on the journey. But “impossible”? Don’t tell me that, especially when it comes to human dynamics or skills. This Fire Truck model is a tour de force of Dad’s determination and proof that “where there’s a will, there’s a way”.

By the time he built this for me, he was himself completely blind. He had no plans other than those in his head (a lesson well learned from the Jimmy Stewart movie Carbine Williams that was one of his favorites and one we watched together a couple of times) yet look at the details like the wheels and placement of the holes in the rims or the rungs on the ladders. This is no kit. It’s a scratch-built like mine, only made from various types of wood stock. He not only built it, but he put a beautiful finish on it – one that took me until a year or so ago to replicate. None of this was easy for him. It took several tries on each piece before he got it down pat enough to get it to look right. And because he couldn’t see it, he relied on his sense of touch and the verbal feedback of others. I asked him how he knew to put intake and discharge outlets on the truck and he told me he had asked someone about the truck, if anything might be missing, and then took the advice and added them. He listened, a skill many of us don’t use frequently enough. And to top it all off, he didn’t build this because of his passion for fire apparatus, which feeds most of the projects I work on, but he did it all because of his love for his son. That will, forever and always, trump just about every other project I’ll ever work on. So whenever I get stuck on a project and can’t seem to solve a problem I look at this beautiful wooden Fire Truck and think “OK Pop. How do I do this?” Neat thing is, I usually get an answer.
​     ​

My favorite fire truck model isn’t one that I made out of plastic or even built. It’s a model fire truck my dad built for me as a gift when I was on the Ogdensburg Volunteer Fire Department back in New Jersey some 25 years ago. It isn’t the sentimental value of the truck that makes it my favorite, though I would probably rank it right up there with items in my life that have real sentimental value. What makes it so special is that every time I look at it I just have to admire Dad’s never-quit attitude and his tenaciousness in finding ways to get things done. The entire model was built without plans, without pre-fashioned parts from raw lumber, and was cut, sanded, fitted, assembled, and finished without the benefit of his eyesight. Dad, by the time he built this, was blind.

Dad helping me build my first plastic model - I think it was a Renwall Wrecker kit. That's my younger brother Jim in the background. 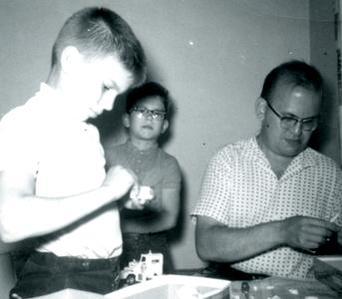 Dad as a young man, building a free-flight model airplane before losing his eyesight. 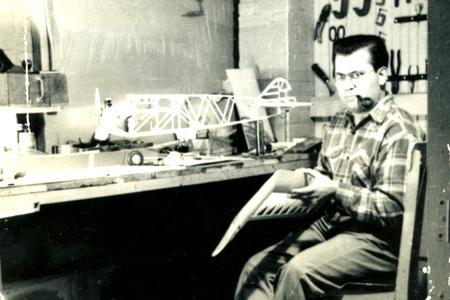