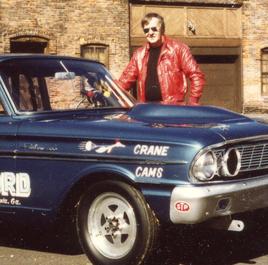 Lee qualifying the car as Malfunction II in 1965.

Lee Malkemes with the Little Georgia Shaker in 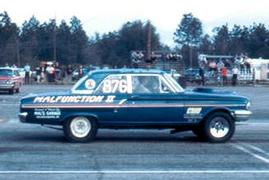 Most of the photos below were taken at the Kingston Armory and at our offices on Market street about a week or so later.

The twisting trail of a famous straight line racer...

In Part 2 we'll discuss the detailing that went into the model.

​Some would say, and I would agree, that The Little Georgia Shaker was and still is one of the prettiest Thunderbolts that ever screamed down a track. A true gem if ever there was one.

​          When Hubert received his new Ford Falcon the following year (he named that one The Littlest Gerorgia Shaker), Lee Malkemes of Wilkes-Barre purchased the T-bolt from him and re-lettered the car as Malfunction II (Lee’s nickname is “Mal”) and raced it for a while traveling up and down the east coast. At a race in North Carolina against Ronnie Sox and the Sox and Martin team, he hit a chuck hole at the end of one of his warm-up runs. The impact tore the spindle and front right wheel off, sending the car into a wild end-over-end wreck that nearly put it into the woods. To see the results, see page 75 of Total Performers: Ford Drag Racing in the 1960s​ by Charles R. Morris. Also, Video #002 on The S/S & FX Era 1963-1967 Southern Style Drag Racing by Jim Amos at Bee On Video, includes  a great interview with Lee and some footage of the crash and aftermath. Jim in great part was the catalyst that got Lee to rebuild the Shaker.

After they salvaged the engine and other usable parts out of the car, the hulk lay derelict in a junk yard for many years. Finally, after a trip to the site of his accident with Jim Amos of Bee On Video, Lee got the bug to repair the grand old girl. the beginning of the 1994 racing season, he had restored the car to full racing trim and has been tearing up nostalgia meets with it ever since.

The restored version differs from the original slightly for safety and performance sake, but the car is as faithfully restored as it could be. Collectors apparently agreed. In 2006, Malkemes sold the car through the Barrett-Jackson Auctions for a reported $165,000.

As for Platt, the famous straight-line driver passed away in 2015 after a brief bout with cancer.

As for Platt, the famous straight-line driver passed away in 2015 after a brief bout with cancer.