​     This model was built on a dare from Pat Covert, the Hot Columnist from Scale Auto Enthusiast and the IPMS Journal. Pat is a great guy and known for his outstanding models and masterpieces. He truly is one of the masters of the craft, especially in building cars and for a while, we were both doing columns for SAE at the same time. We also attended a few conventions together and there was a bit of friendly bantering over what was harder - building fore apparatus or building hot rods. I felt doing apparatus was harder of course. 90% of every model is scratch and has to be pretty detailed following the details on the real thing. Pat countered (very good naturedly of course, that they are rolling hardware stores or something akin to that. He countered to say that hot rods were harder because it took more imagination, to which I said, "Yeah, of course. Make a mistake and all you have to do is say you meant it to be that way..." or something to that effect.

Concept and Part 1 of the Build 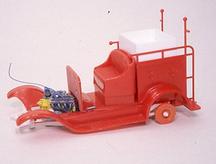 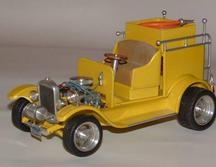 So finally at one convention he dared me to build a hot rod. When he told me it could be anything I wanted, any topic, I replied, "Really? Any  topic?" "Yeah", he said, "Any topic." A few months later I plopped it on to a table in front of him and we both had a pretty good laugh. The license plates say it all...  "SOSUME" ("So Sue Me").